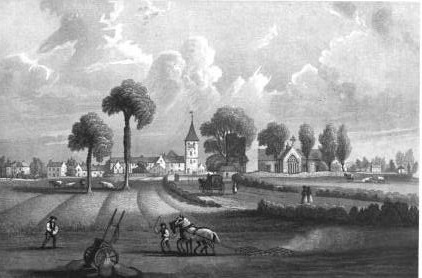 In about 1864, the Coupar Angus Parish Council was given a property which it used as a 'parochial lodging house or almshouse....It could accommodate up to 7 men and 9 women under the supervision of a resident matron. For more information go to https://www.workhouses.org.uk/CouparAngus/

Chapter from A Topographical Dictionary of Scotland.

In 2005 the late Mr Garnet McFarlane was interviewed about the role of the former Town / Burgh Council, of which he was a member until its dissolution in 1975. He said the Town Council "ran the town". You can read the text of the interview in ﻿﻿﻿this Word Document﻿﻿﻿.

​History of Scottish local government, with reference to Perth & Kinross

A little essay about local government in Scotland, including parishes, town/burgh councils and shires - click here.

Before coupar angus had a town council...

Many towns and burghs had no form of town council until they established themselves as Police Burghs. These were created under the Burgh Police (Scotland) Act 1833, which was updated by the Police of Towns Act 1850. The term ‘police’ in this context meant municipal governance... CLICK HERE TO DOWNLOAD FULL ARTICLE

Excerpts from ‘An Angus Parish in the 18th Century', pp166-179. An account of whisky smugglers travelling south through Coupar Angus, the efforts of the excise officers to stop them and the court cases that took place in Coupar. You can download the whole book ﻿﻿HERE﻿﻿.

1645, the year that Coupar Angus was plundered and burned

From 'Annals of an Angus Parish'
(summary of p90, plus a few bits of info from other sources)
Alexander Macdonald, a.k.a. Alasdair Mac Colla, was a Scottish soldier known for his physical strength and ferocity in the battlefield. In the war between Covenanters and royalists (one of the Wars of the three Kingdoms, 1639-1651) he was a 'stout upholder of the royalist cause in the Western Highlands' and devoted follower of the Marquis of Montrose. After laying waste to the county of Argyle (home of the Covenant-supporting Campbells) he was present at Montrose's sacking of Dundee in 1645, and plundered and burned Coupar Angus by the orders of Montrose.
Mac Colla and Montrose got their comeuppance. Mac Colla was killed in Ireland at the battle of Knocknanauss of 1647 (he was part of the Irish Catholic Confederate army that was defeated by English Parliamentarians). Montrose was hung in Edinburgh in 1650, and his head and limbs put on spikes around Scotland (including a limb in Perth).

A short history of Coupar Angus

The earliest evidence of human settlement in Coupar Angus is cist burials from the Bronze Age period. Archaeological fieldwork in the 1990s indicated that the Strathmore area supported a sizeable Iron Age population...READ MORE